The combination of images and music is far from a revolutionary idea. Although it is a common marriage, few do it with as much class, grace, and beauty as Loma Lynda. The group has gained much notoriety for their haunting audio and stunning yet eerie visuals. I spoke with Jason Bognacki, who is at the helm of Loma Lynda's most exciting and ambitious endeavor to date, a feature length film, The Red Door.

Christine Makepeace: It goes without saying that Loma Lynda finds visuals very important. I know you use some archival footage from the 70's, what do you find appealing about that type of footage?

Loma Lynda: In Loma Lynda: Episode II (which premiered at The Sundance Film Festival) we loved the idea of "reviving visual ghosts" from the 1960s-1970s, and breathing new life into forgotten and discarded film that otherwise was just rotting away on archival shelves and in people's basements. A lot of the film we freed from old libraries, garage sales, and even family vacation films off of ebay.

In the process we destroyed a lot of prints just by playing them…but others found a different fate. To get some of the treatments in Episode II we poured bleach and other household chemicals into running projections. The chemical cocktail would eat away the images as they were being project onto the screen. We also had many projectors in various stages of functionality dis functionality …some even would rip off the immultion from the film as it was moving thru the film gate.

LL also shot a lot of our own super 8 and 16 mm film to match and intercut with the vintage stock we were reviving. As an audience watching the performance it was almost as if the band somehow got caught up into the projections and ended up in the film as well. All the members of the band made it into Episode II's implided narrative in our live performances.

CM: The audio and visuals Loma Lynda creates is very compelling and could easily stand alone, have you always created the 2 simultaneously? or did one exist without the other at some point?

In a way for LL the music and the film cannot be separated from one another…At least during the creative process. One day we'll be writing scenes and planning shoots and the next we'll be writing music….while other days we'll be writing music or rehearsing the musical score and stop mid song to discuss what is happening on screen. It makes for a chaotic environment sometimes....but at the same time a very organic one…one which grows around itself…inside and out…

CM:I adore the Gnarls Barkley "Crazy" cover you have up on your website. What inspired the cover…

LL: We got a hold of a demo of "Crazy" awhile back and we were like…"Where have we heard that music before"…. it was so cinematic…It was so familiar…and after a little of research we found that is was a track from the spagetti western "Preparati la bara!"…not that we've seen that film or remember seeing it but the song had that Morricone edge to it…just a huge epic sound, The original by Reverberi brothers is just as great as well. We loved the idea of reinventing it again in Episode XXXVII…our space epic….westerns and space films are very similar in music styles sometimes…with big choral arrangements and the need to musically describe physical space. Westerns and Space movies are always about tangles with vastness and the unknown in some way…

CM: What other types of films and styles do you draw inspiration from?

LL: At the time of Episode II I guess we alittle inspired by Stan Brakage but didn't know it. Cutting up, drawing on, and destroying film...we naively thought we were doing something new.

The Red Door has been influenced by the likes of Jess (Jesus...aka...Jon...aka) Franco, Mario Bava, and Dario Argento to name afew...not their Giallo films per-say but more the fashion, style, and camera work these directors use.

CM:Tell me a bit about The Red Door.
Is it comprised completely of new footage?

LL: The Red Door is the first non-performance film we have produced as of yet….that's not to say we won't someday play live to it…we just didn't want to be encumber by writing music that had to be performed live and create a film that was in the most part edited live for each "showing" or performance. LL basically wanted to make a "traditional" film…with running dialog…etc…etc.

The Red Door is a modern Giallo film styled around the manic characters Loma and Lynda. It is a dark and stylish tale of love and murder takes place in the street's of Hollywood and in the bent mind of our herion, Lynda. Without giving too much away it is very much a story about schizophrenia and is told thru the delusions of the main character.

Unlike most LL music to date the soundtrack will have lush string arrangements and running dialog.

The Red Door is comprised of all original footage. I've been shooting the film with SONY HDV cameras with 35 mm film lenses, giving the images a very cinematic look and feel. We've employed many 70's shallow depth of field tricks to bring the Red Door to life...too many indies these days look like video.

In early FALL 2007 we'll be finished with a short version (40min) of the film which we are submitting to the festival circuit…By Early 2008 we'll be complete with a feature length version of The Red Door.

LL has always be constantly evolving group…After EPISODE XXXVII ran its course, we saw afew people move-on from the musical side of the group, but with a new project we see new faces.

We are very excited to be working with a new set of artist on this project….

New members are on the musical side….

on the acting side

So keep an eye out for this innovative grouping of maverick artists. Track their endeavors and learn more about the group at www.lomalynda.com or www.myspace.com/lomalyndapresents 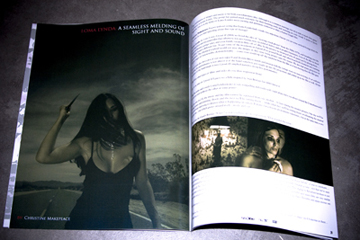 The folks at PARACINEMA magazine were kind enough to take some time to catch up with Loma Lynda and their latest project
The Red Door.

By all means go out and buy the magazine to read more. There are some other great articles such as
Becoming Bruce Campbell ...